A downloadable game for Windows, macOS, and Linux

This is a horror game and may not be suitable for all audiences. Content warnings below.

"Ryo, we've discussed this before, haven't we? You don't have a mom. I made you from straw, magic, and a lock of my hair."

Crowscare is a short horror game, RPG game, and a love letter to the autumn season.

The game follows a young boy named Ryo, excited for the upcoming Harvest Festival in his hometown. Wouldn't you know? This is going to be his first one! He was never able to go to one before, as it always started past his curfew...but soon he'll see why he was never allowed out at night.

The game takes about 1-1 ½ hours to complete. There are two bad endings, and one good/true ending.

MAC USERS: This game may not work on all Macs.

If it does work on your Mac--When opening the game, do NOT click on the "Game" application. Instead, follow these steps:

Opening the game this way will allow you to safely use the menu and cancel commands. Opening the game from the application labeled "Game" will make it so that you cannot exit out of a menu that's been opened.

Check me out on patreon to keep supporting my work!: https://patreon.com/arcadekitten

my game glitched in the potion room, i was stuck. but i saved not long ago so it's okay! anyways i loved this, it's much better than i expected! unfortunately i got the 2 bad endings but the good ending with ingram was so wholesome! and the embry easter egg made it all better lol

It's beautiful just like "It's not me it's my basement" and isn't that "Dr. Delight"?

Still waiting for the next game

Again I absolutely loved this game!! Got 2 endings very very amazing story, plus isnt that Embry??

Are you able to make one for chrome? it's fine if you can't though!

YOOOO! I didn't even realize this was from the same person as the basement game when I downloaded. Seeing Embry just hanging out in town was like ":OOOOO!"

I got the ending where the sun won't come up tomorrow, oops. Tho that was a pretty good ending. I was SO close to the good end! The only thing I missed was finding the last book that only appears after getting the lantern. I had trouble seeing the yellow books when the lantern was lit (they pop so much better when it's dark), so I couldn't see it when I went by.

Amazing stuff, played through twice before the game glitched on my third run. To anyone trying for the good ending, make sure to get the clock hands before entering the combination, otherwise everything will break

I loove ur all games ^^ this is my favorite

I really like the story. The art style is simple and good. I also like the atmosphere of the village which is not quiet. Overall it's good👍. I made the gameplay on Youtube, you can watch it if you want.

still trying to get pasted the potions </3 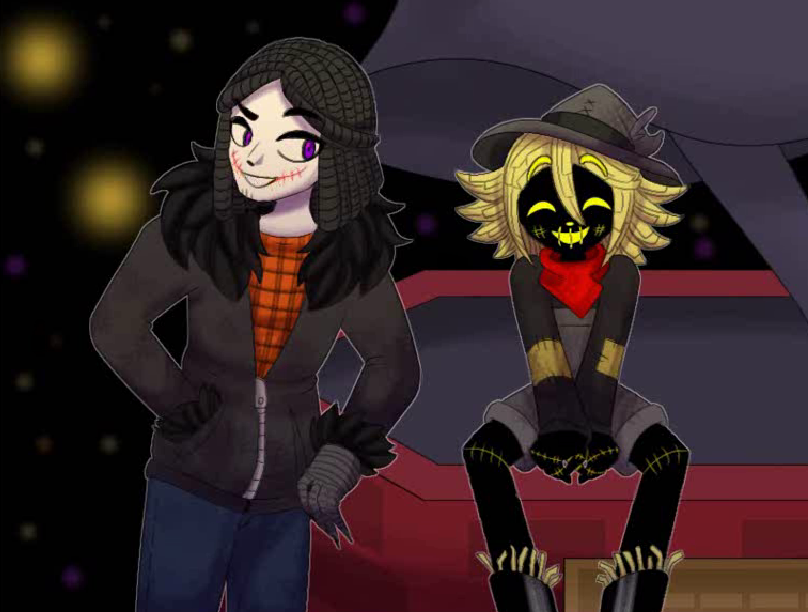 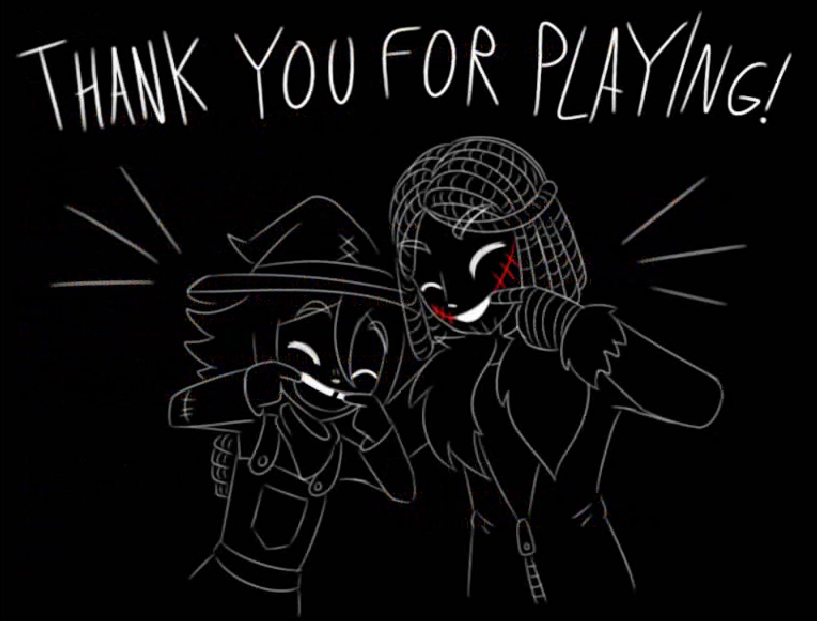 This is such a good game! Can you please make more of these-?

Reply
Eshbaal29 days ago
Wow, so I have actually been looking at "It's Not Me, It's my Basement" for a while and just didn't get around to it. Then I played this one without even realizing they were by the same person - and now I definitely need to play your other stuff.

I do adore me an RPG Maker horror game, but this one was slightly different - it's a bit oddly paced, practically being a visual novel for 45 minutes until you explore the Witch's house for a bit, but from there it does pick up.

YOu have a real charming little world with a fairytale esque lean to it I enjoy, just having to accept the rules of magic and what else is going on. Protagonist is just a scarecrow, no deeper history to it than that. I do like it. And when it does get gruesome, it does so suddenly and startlingly, which I do appreciate.

Also the art is absolutely adorable, so that's another plus. Wonderful little game.

I haven’t gotten it yet but it looks so cool! :D i bet its gonna be amazing cause your games are great! Keep going!

arcade kitten Your games are the best!! Thank you for giving us a little bit of Dr. D. Light!! I loved Ryo, everything was just WOW, AMAZING!! Keep up the good work, but most importantly take care of yourself!! 😍😁👍

This game had me at the edge of my seat the whole time, and the walkthrough was very helpful thank you.

You once again created a masterpiece!!

Reply
CrossXGames31 days ago
Cute horror is the only way to go. Having a ton of fun with this one!
Reply
CommonCell32 days ago

ManlyBadassHero played this, And it looked really well polished, was not dissapointed when i played it myself!

Very! You should absolutely play it, the game’s a joy!

Hello,Im taking game banner request's,I will do them whenever i can ^^

This is a really cool game! All the characters are so pretty and cool and I love the story! I really like a lot of your other games as well and look forward to any new games that may be coming out

Only natural that another fabulous Arcadekitten VN would come around with the returning advent of Spooktober! Adorable artwork, loveable characters, and all in all, another joy of a story that left me in tears come its ending. Might be I'm just an easy crier, though. I could go on gushing about the game for hours, but I'd rather keep it concise. It's a sweet Halloween story, and one worth every minute spent.

Although, I am left with, as is inherently natural in every Arcadekitten game, a few wonders, now that it's done and dusted. Each game by the creator ties into those previous, but I find myself curious if the cameos are just references, or if it's all one interconnected universe. Thinking with the same logic in the other direction, I'm curious if we'll  see the battered orange-haired girl going forward. Her appearance was so light, but it's also rather conspicuous. On that train of thought, will Narwhal Boy appear in a later title? Only time will tell, but I'm certainly excited to find out.

Oh, and, of course, it was lovely to see the Doctor once more. He's the centerpiece of my wondering for a connected universe, because, if it's so, Embry's family must have not only survived the events of INMIMB, but with the Doctor as a third addition!! How lovely would that be? How... delightful? ahaha,,

It's always so delightful (no pun intended!) to read the thoughts you leave on my games, I look forward to it now! Thank you so much, it means a lot to me! <3

I'm so absolutely glad that the little comments I write can make somebody's day that little bit better! It's absolutely the least I can get done- the games are always wonderful to experience, and I can't imagine how much effort they'd take to design. And, for the record, the feeling is wholly mutual; I adore the opportunity to live the events of each VN (does Crowscare count as a VN??) , and I look forward to each new story, each slice of a fascinating, ever-growing world, being released. Every time, every story, it's always a joy!

P.S., just realized there was a PATREON, no clue as to how I missed that, but I'm absolutely going to find a way to donate on there at some point!!

I love this cute scarecrow child i need more of him

I see you have a wonderful following on Twitter, and having a personal community would be a great next step

This was good, I like how you were able to see the twist coming but it didn't diminish its impact. Overall, this is was a fun game with likable characters. Although the gameplay segments could be expanded upon, like adding a puzzle here and there.

So far interesting, I love this kind of things after all~

The look, the theme, the music, etc~

Though I just didn't expect the reveal of Ryo being a [Redacted] to be that fast!

Well the 1st ending and 2nd ending is expected, still Ryo in the second ending q_q

Now the third ending is something~

Well either way another fun game~

There's some mystery I'm still confused though, who's Ms B...?

Also interesting thing I find is that the straw could work because the Witch even when using him still consider him as a family.... Heh, wicked love.

Finally got around to playing this and I LOVE IT!!!

Such a wonderful little horror game, the art and writing are as incredible as always. In terms of atmosphere, this felt almost like the middle ground between Tricks N Treats and INMIMB, cute and endearing in so many ways but still with some very unsettling setpieces (the first bad ending really caught me off guard, and I'm still thinking about the skull in the lantern room). It was great to have Ryo in the spotlight for this one, he's the cutest scarecrow ever and was a really fun protagonist. His Dad and his 'Mom' were also fantastic new additions, she in particular had me questioning what was going to happen next. Took a bit of time to figure out the true ending but that was well worth finding, all of the endings were excellent.

And of course the cameos! Fantastic to see Necrotary, Embry and Dr D Light return, it's always interesting to see how the characters act differently depending on the scenario but still act recognisably as themselves (also, Dr D acting as a third parent to embry? HELL YES!). You know, this is why you are one of my favourite developers of all time (apart from the excellent writing and art of course); no matter how many times you bring back the same characters, every story they're part of is completely different. Whenever I boot up one of your games I immediately get a feeling of both familiarity and uncertainty, and it's a feeling completely unique to your games. I've really fallen in love with these characters, and each new iteration just makes them more and more engaging to follow.

Absolutely fantastic, I am already so excited to see what you come up with next.

Yet another excellent outing in your wonderfully charming world! Keep making them!!

So I had to play through this ENTIRE game 3 times to get all the endings but it was SO worth it. Thanks so much for this awesome experience. I actually enjoyed putting as much time as I did into this. Here is my full playthrough with all of the endings.

Oh my gosh! Arcadekitten! I loved this game. SO MUCH. It was cute, creepy, and wholesome all in one game - just the way I like it. I first watched a playthrough on YouTube and then played it myself; this is probably my favorite of all your games. The story was amazing, the characters were well-developed and likable, and your art style is just so cute and endearing!  I'm currently working on a fanart/screencap of sorts for Ryo and his dad... I'm hoping to show you one day!

Much love to you, arcadekitten! 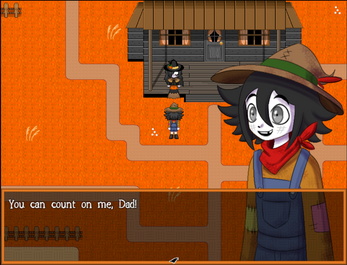 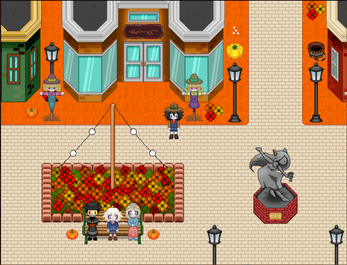 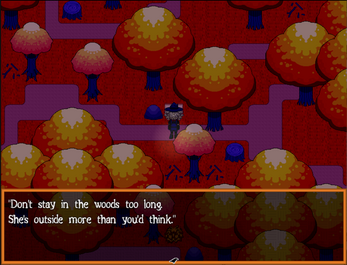 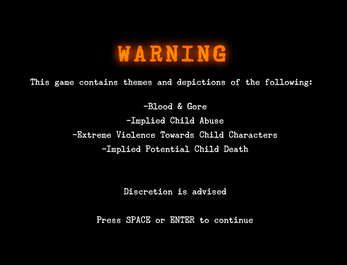