A downloadable game for Windows, macOS, and Linux

Not everyone gets chosen to attend Aether West Academy-- but YOU did! And in the middle of the school year, no less! That means you have a lot to catch up on...socially, of course.

With your charm and personality, you're sure to capture the hearts of all your classmates--and that's just what you intend to do!

Oh, and one last thing--don't ask why you're dorming alone, it's not important!

Here for Sweethearts is an episodically-updating friend-sim styled VN. Your goal is to try and get as many people as possible to love you, in whatever form that love takes! Game takes around 10-15 minutes per chapter.

**THIS GAME IS UPDATED IN CHAPTERS. MORE CONTENT/CHAPTERS WILL BE ADDED THROUGH UPDATES UNTIL THE GAME IS COMPLETE**

So far a really nice game

Reply
Lei is my nickname10 days ago

So on the plus side this visual novel has an absolutely amazing art style that is easily of the highest quality I've seen outside top tier anime.  I'm in love with the visuals of the MC as well as those of several NPC's.  In addition, the story that you are expected to follow to progress the narrative is interesting, presenting several mysteries right out the gate to draw your interest.

That leads to the other side of the coin.

On the con side, the presentation of the CYOA format is deceptive.  You are required to befriend (Capture their Heart) every NPC you meet along the way before you can progress to the next one.  This results in interactions that are forced upon the player and removes any player agency within the story.  With no player agency there are no consequences either for your actions other than a hard stop on the progression of the story.

While I will continue to look forward to more chapters, this will take a back burner over other VN style games unless one of two improvements are made.  Either add a "Story Mode" that simply tells the story the developer wants told or add player agency that allows you to progress the story without befriending every single person and allow the player to feel the consequences of befriending or not-befriending specific people along the way.

Chapter 3 is finally out I'm so excited!!! (Forgot to post it here :P)

Been wanting for awhile to meet with Mitzi which I must say do not disappoint! Though I feel like this chapter is much easier than the previous other? Perhaps because I'm biased of knowing how the main character act already therefore making choices which is more suitable? Either way yeah, Ollie's chapter soon~

Chapter 4!!! Ollie's route!!! Turns out I like Ollster as a character~ They has quite an interesting personality and also ghost???? I didn't expect another one with such ability??? But yeah!!! Another interesting and fun chapter to explore~ Though it feels a little bit lacking of continuity since the frog didn't gets mentioned at all within the span of two chapter unless you didn't give Ollie the ticket :(

I will admit, it took me this long to figure out that itchio has an actual review feature, but I figure most people are either like me and took a while to realize, or are going to read through comments more than the reviews. So, I'm still going to leave a blurb in the comments about how great this game is. In general, Here for Sweethearts is a sweet (pun absolutely, if poorly, intended) story building off of the creator's previous work, and utilizing the intertwined stories well, while still creating something uniquely interesting. The player isn't given much control over the MC beyond the initial selection and naming them, although that makes sense in a game with clear and well-defined end goals. (I'd also like to note that, just like in every previous game, the creator does a great job of giving the MC personality from the very beginning through a unique character aspect, something which is common throughout all their games, and is a great way to attach an audience to a new character. If you're at all interested in writing, these are fabulous exemplars of how to give not just a story, but a character too, a hook!)

Getting a bit of Theo's history prior to Cemetery Mary was absolutely fun, although the self-contained chapters leave something to be desired. I think that's wholly to be expected, though- after all, the game is subject to more additions, as development continues! Character interaction was, as always, a delight (one might say a D. Light) and the frog is the best favorite character. I certainly might be wrong, here, but I get the vague idea that there's something deeper to be explored with this school, and it seems like the game is shaping up to work that in with the stories of Reginald, Crowven, and Mary from years past. The game is relatively short right now, but as it's fleshed out, I get the idea that Here for Sweethearts is a game with a lovely amount of potential, and I am so excited to see where it, and other projects, go.

Can't wait to see the next chapter! I love it, when I got a third option in "How do you present yourself" I felt very good that someone's thinking 'bout non-binary people! The whole game is amazing! Love it and can't wait to see more chapters! Also don't get in trouble at school c:

Hello, I enjoyed playing the first two chapters, I've got to say, I love how the characters all look and am interested to see what's in store for the upcoming chapters.

I was wondering how many chapters are you planning to release if it is not too much to ask?

Thank you so much! I currently have about ~16 chapters planned with 12 of those chapters belonging to students, though that number is subject to change depending on multitudes of factors. I do intend to get them all completed, though!

Which of these downloads is for Android?

There's none currently it seems!

Is there anyway to restart your progress? like, reset everything?

Lmaooooo my brain really thought her name is Intro, but yeah it's not cleared.

Anyway to the more serious writing, I love the background aesthetic with the "glow" filter, and I feel there's a huge improvement of the background from the previous visual novel game you've made (?; could be a bias of me influenced by the "new" status of this game). The text are easy to read and the dialog box doesn't conflicting much with the background. The sprites are lovely. The zoomed up on father face seems a bit off, not because it's weird but because the downgrade of the father face being stretched to fit the face on the screen (?; I could be wrong since I'm not an artist; perhaps there was no downgrade of quality in the father face?).

In the end, it's lovely and I would love to see more~

Edit: Moving the video to the top of the text.

And this visual novel goes to a direction of what I would call "Dark Love". The easy to digest term would be "Dark Romance" but it doesn't really tell the whole aspect of love in this game which is either or both romantic and platonic. In video itself I refer it as "Dark Otome" since I'm trying to find a 'correct' word to refer to the style of the plot. Which I think still cannot convey anything, since Otome are related to romance, especially young girl demographic if I remember. So I come with the term you've seen before, "Dark Love".

I love it, it is something I seek of a "Dark Love" where instead of a normal love story where you'll be morally good (or bad)/caring for one or multiple partner here what you love is your own self. You just want people to love you. You don't care what method or the 'opinion' of other character as long as they all will love you.

In video I called the main character a person without heart themselves, as their heart always change like a mirror to match the person they want to capture.

I think that's all.

Chapter 2! Feels more sweet than Netty my bestie chapter, which feels more sinister. I really love how Theo expressions are explored here, I thought he'll be just a cold guy but apparently he has a cute side to him too!

Well, my final note for the game is that I notice that it seems there's a lack of sound and music. I'm okay with this, but perhaps some people will feel it's rather mundane on that part? Though it isn't too much of an issue, like it's still a good game. I mean you did a good job at controlling when to silence or to play the music which is already great!

I think that's all and I'll be waiting for the next chapters! Keep doing a great job!

Hello Arcadekitten, I've really enjoyed my time playing through the current 3 chapters so far. Favourite character: Intro! ^o^ Really loved the It's Not Me, It's My Basement reference in the game with the Doctor included at one point, thought I recognised that distinctive face somewhere! :D

Nice! I enjoyed what I played and I'd like to see more. The Dad's reaction to the preferred name certainly brought back some memories lol.

Yay! I finally got to play this!

Another fantastic game, your art-style is beautiful as always (I love all three designs for the protagonist) and the music is really sweet; I'm going to be humming that theme song all week. Really cute story so far, interesting idea having small separate chapters for each character rather than one long route, and there are enough hints dropped to make me very suspicious about what's happening in this school. I loved the little background details referencing other games, and I squeed so hard when Scary Mary was mentioned.

Love this, you're still one of my favourite developers and I will be keeping a close eye out for future chapters, can't wait to see how this goes.

Such a fun introduction to the story as a whole, I'm really excited and interested to see what all happens and who else we might meet! Short, sweet, but definitely leaves you curious and wanting to know more!

You are always so supportive of me and I promise that support does not go unnoticed! Thank you so much! :'D 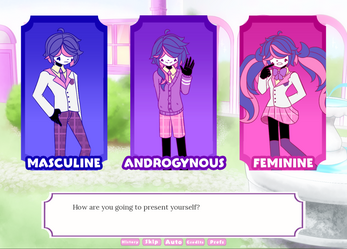 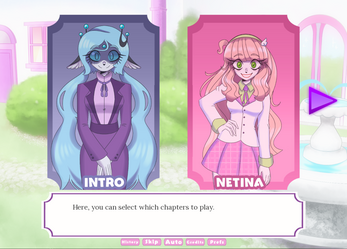 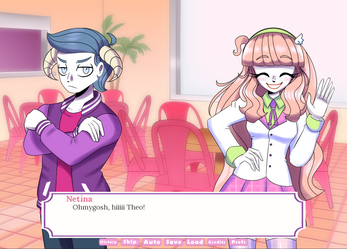 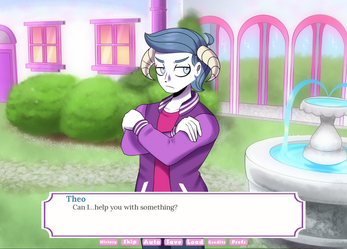 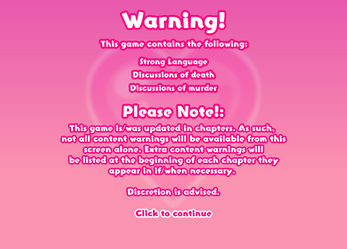